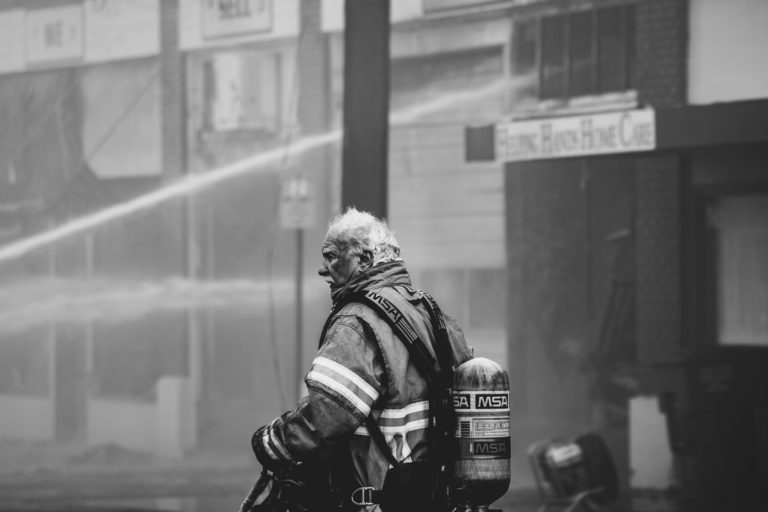 The leading cause of occupational deaths for firefighters is cancer, killing two out of three firefighters who die in the line of duty, according to a study from the National Institute for Occupational Safety and Health (NIOSH).  Firefighters are increasingly being exposed to a “potent cocktail of carcinogens,” according to Boston Fire Commissioner Joseph Finn, an advocate for firefighter health and safety who has lost over 200 colleagues to cancer.

Plastic fuels much of the toxic smoke that threatens firefighter health, according to the International Association of Fire Fighters (IAFF). These synthetic chemicals and toxins appear in carpeting, furniture, wires, and plastic piping, among other building materials. Toxic smoke is not just limited to fires in buildings, wildfires also generate huge volumes of smoke that can spread hundreds of miles.

“It’s not just plants and leaves burning, it’s homes and structures too,” Matt Alba, a San Francisco fire captain, told The Guardian. In recent years, residential and even commercial structures have expanded into forested areas. When wildfires occur, the plastics that burn within these structures combine with the smoke emitting from other materials, increasing its toxicity.

Twenty-eight-year firefighting veteran Tony Stefani went on his routine jog one day in January of 2001, in his career-long residence of San Francisco. Although a fit and healthy person, he began to experience abnormalities caused by the toxic fumes he had repeatedly been exposed to in fires.

“The last mile I could barely run, I had to walk,” he told The Atlantic. Shortly thereafter, he was diagnosed with a rare kidney cancer. The same article also relates the story of Keith Tyson, another firefighter with 34 years on the job, who was told shortly after retiring that he had an aggressive form of prostate cancer. Like Joseph Finn, Tyson estimates that a third of his colleagues have had some kind of cancer just in the past three years.  “I’m not saying that every single one of those cancers was caused by the job….but at the same time…we have a problem,” Tyson said. This issue is not just limited to the countless career veterans, like Tyson and Stefani, who have suffered from cancer as a result of their occupation. According to Joseph Finn, the problem is growing among younger firefighters, too.

“We’re seeing a lot of younger members in their 40s, early 40s, who’ve got 20 years on the job, who are developing these cancers at a very young age,” he said in an interview with NBC News. “It blows my mind…these are guys who are 40 or 45 years old…and some of them have been on the fire department for just 10 or 15 years,” he told Boston Magazine.

One of these younger firefighters is lifelong Boston resident and firefighter Glenn Preston, a colleague and friend of Finn’s. A married father of four young children, Preston has already undergone chemotherapy treatment and had a bone marrow transplant at the age of 41. Preston was told by doctors of his cancer at the young age of 39, and as he told NBC News, the tumor was discovered in the lining of his heart.

The connection between firefighting and an increased risk of cancer has become increasingly severe over the years, with the most deeply concerning figures appearing roughly 10 years ago. A meta-analysis identified higher risks of multiple myeloma, non-Hodgkin lymphoma, prostate, and testicular cancers. “The longer you’re a firefighter, the greater your chance of getting some kind of cancer… These are people who have a gladiator mentality, and they’re really tough. [But] now you have a different kind of danger,” Susan Shaw, ED of the Marine & Environmental Research Institute and environmental health science professor at SUNY Albany, told The Atlantic.

It is essentially unanimous among researchers and experts familiar with this crisis that the increased levels of cancer among firefighters can be traced back to the materials in our homes. “Every substance, when it burns, changes its chemical structure…particularly when you burn something that’s synthetic or man-made, you’re creating strange compounds that we don’t know what they’ll do,” said Timothy Rebbeck, professor at the Dana-Farber Cancer Institute and Harvard School of Public Health.

Contemporary architecture and construction that involves the widespread use of synthetics and plastics “can explode much faster and coat firefighters in a toxic soot” that leads to these effects, reports NBC News on the behalf of researchers.  In 2018, the U.S. federal government enacted The FireFighter Cancer Registry Act of 2018 (42 U.S.C. 28oe-5), which mandates that the CDC begin developing and maintaining a voluntary registry of firefighters in order to enhance how cancer rates among firefighters are monitored, recorded, and made available to the public for the sake of analysis and epidemiological information. The registry was developed with the goal of bolstering research and analysis on occupational cancer incidence and trends among firefighters, seeking to further identify the causes, risk factors, and more.

In response to these findings, among others, the IAFF called for officials to limit the use of plastic piping in many commercial facilities. The IAFF and pipefitting associations have instead encouraged the use of non-combustible, safe, recyclable, and sustainable piping materials in plumbing systems because of their inherent health and safety benefits. In critical facilities like hospitals, high-rise structures, and other health facilities, the IAFF asserts that plastic pipe presents too many risks for occupants and first responders, citing exposure to toxins in fires, poor fire-stopping characteristics, and water quality defects.

In addition to negatively affecting the health of firefighters, the use of plastics can have long-term effects on building occupants. During the Camp Fire, underground plastic pipes melted and contaminated the area’s water supply with benzene – leaving Paradise residents without clean water for years, and with a clean-up job estimated to cost the city hundreds of millions of dollars.

Even without a fire event, plastic pipes can contaminate and disrupt drinking water quality. Research indicates that plastic pipes not only emit chemicals like benzene when heated, melted or burned, but also leach a range of 163 substances even in normal plumbing applications. Of these, 14 percent (23) are proven carcinogens and others are reproductive toxins, while many are simply not understood well enough to judge potential impacts on human health.

The rate of firefighter deaths by cancers will continue to climb if communities and building officials do not address the plastic and other materials that generate toxic smoke. Around 61 percent of all career firefighter line-of-duty deaths were due to cancer between 2002 and 2017 and the numbers continue to climb – with 70 percent of all occupational deaths for firefighters being due to cancer in 2016, according to the Firefighter Cancer Support Network (FCSN). Firefighters are 9 percent more likely to be diagnosed with cancer, and 14 percent more likely to die from it, than the general U.S. population, according to the FCSN.

“Cancer rates amongst firefighters have dramatically increased due to exposure to toxins from plastics and other building materials used in construction,” says a statement by the IAFF. “All buildings should require the installation of safe, recyclable, non-combustible, and sustainable piping materials for plumbing systems to protect the health and safety of first responders, building occupants and the environment.”