Recent contamination of water systems by jet fuel leaking from the Navy’s Red Hill fuel storage facility in Hawaii illustrates again the importance of safe drinking water and of the piping that delivers it. As the situation evolves, Safe Piping Matters is sharing developments along with recommendations based on research studies and lessons learned from previous contamination events.

Many questions remain about this incident, including one that has been largely ignored to date:
How will the Navy and local officials repair or replace pipes impacted by chemicals released into the system?

Research highlights a number of piping hazards that put human health and safety at risk:

Other important questions that need answers:

Finding solutions really matters – not just to the thousands of people directly affected, but also to the entire population of Oahu. Fears of continuing contamination have shut down wells that supply Honolulu and surrounding communities. In fact, it’s possible the incident could put a stop to all development on the island. Wayne Tanaka, president of the Sierra Club’s Hawaii chapter, calls the fallout from Red Hill “a crisis of existential proportions right now.” Some residents have already given up and left Hawaii – said one: “I don’t trust the water. I don’t trust the government. I don’t trust the navy… You can’t live without water.” 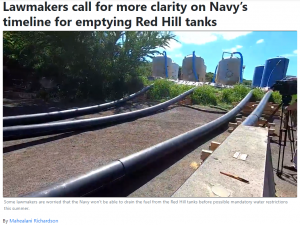 The crisis on Oahu emerged in late 2021, when at least 19,000 gallons of jet fuel from the Navy’s Red Hill storage facility leaked into area wells, continuing a long string of problems there.

The leak affected the homes of about 90,000 area residents, many of whom suffered rashes, headaches, stomach cramps, vomiting and other health problems. Toxic chemicals in tap water flowing from pipes measured 350 times higher than safe limits.

The Navy failed to act or notify officials of the spill until community activists – and the unfolding health crisis – forced their hands. In fact their first response was to  illegally dump contaminated water onto streets and sidewalks. The Navy later began flushing and filtering the water, declaring it “safe” in mid-March 2022.