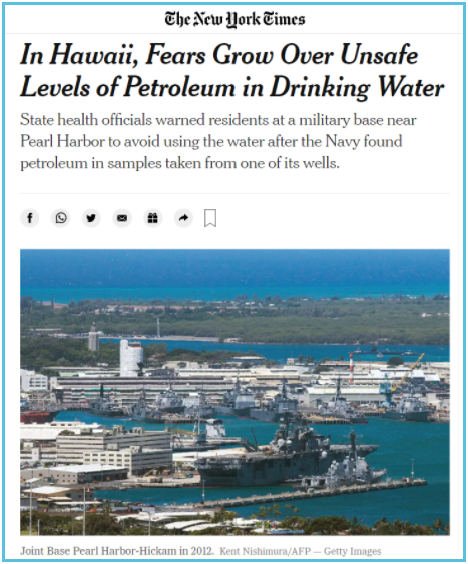 Fuel from the Red Hill Naval facility on Oahu, Hawaii, leaked into a water system servicing over 90,000 residents in November 2021. Within a week, a thousand families had begun complaining about foul-smelling and tasting water in their homes that caused rashes, headaches, stomach cramps, vomiting and other health problems. Testing found chemicals in water at 350 times the legal limit; those affected were told not to drink or use the water in their homes. Ultimately, the Navy moved over 3,000 families to hotels, where many remained for months. In that time, officials flushed the system in attempts to reduce toxin levels. Progress has been made, but the water remains contaminated and many questions remain about the future.

As the situation evolves, Safe Piping Matters is sharing developments along with recommendations based on research studies and lessons learned from previous contamination events.

First, families need to keep testing and monitoring the water in homes, schools and businesses. Even after “do not drink” cautions are lifted, research shows flushing may not fully remove pollutants from drinking water systems, because they adhere to pipes – a process called adsorption. Pipes can then re-release chemicals and byproducts over time. Residents whose water flows through plastic pipes and fittings (such as PEX, CPVC, and HDPE plastics) should remain especially vigilant as toxins in these materials may remain for longer periods, especially when hot water runs through piping. A 2017 study in the Journal of Hazardous Materials shows plastic pipes sorb (take on) and desorb (give off) significantly higher levels of toxic chemicals like benzene, toluene, ethylbenzene, and xylenes compared with piping made of copper.

Second, families must insist that authorities determine the levels and sources of contamination. EPA and local authorities disagree with the Navy’s claims that the fuel leak in November 2021 was the only source of contamination. Honolulu Board of Water Supply Chief Engineer Ernie Lau – whose outspoken advocacy for the community has made him trusted expert on the situation – first heard of leaks from the Red Hill facility in January 2014. If fuel and other chemicals have consistently leaked and remained untreated in the environment for years, toxins could permeate through the walls of plastic pipes and into their water systems, introducing new sources of contamination. If this is found to be the case, soil and water in the affected areas must be remediated. Affected pipes may need to be dug up and replaced –ideally with pipes made of metal or other impermeable materials.

Third, victims must keep this issue visible at local, state and national levels to demand continued water testing and remediation, piping repairs/replacement, and health monitoring and treatment. As of early 2022, teams from the Navy have not determined the sources and extent of leaks nor released a list of contaminants found in the water. Some victims have begun working with legal advocates from Just Well Law to demand action, including traveling to Washington, DC, to meet with lawmakers, and reports indicate victims may seek relief similar to that given those exposed to contaminated drinking water at Camp Lejeune from the 1950s to the 1980s leading to kidney cancer, multiple myeloma, leukemia, and other serious health problems.

Safe Piping Matters has also reported on questions on how piping should be remediated after the contamination.